To MAY toe or To Mar Toe - Kimono or Gi 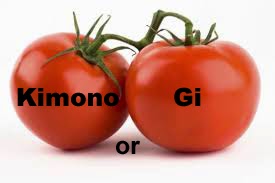 Is it a BJJ gi or a BJJ Kimono?
Exactly as the title suggest.
One in the same!
In BJJ, it is either a Kimono or a Gi ....and Both.
In our ( by OUR I mean Bjjers) specific context, both are equally correct.

This comes up so often that you think that everyone should know this by now but strangely enough some people still insist that it is the one and not the other.

The basis of our argument is very simple and we will keep this short and sweet as this can get really go on forever if we let it.

Our martial art is Brazilian Jiu Jitsu.
As we all know Mitsuyo Maeda from Japan is accredited as the father of BJJ as he went to Brazil and taught Judo Newaza to some Brazilians (Luis Franca, Carlos Gracie, etc...)

Fact no 1: BJJ's roots are from Japan

The BJJ we know of today however is an evolution  and growth from its roots, changing dramatically by taking on Brazilian Culture, spirit , new techniques and  style. It is no longer Judo Newaza but is now its own martial art.

Fact no 2: BJJ as its name suggest is a Brazilian Martial art.


Why is Kimono also a correct term?
In Japan, The word "kimono" simply and literally means a "thing to wear" (ki "wear" and mono "thing").In this day and age of TV, movies and media, we have wrongly  solely associated the word with only the fancy traditional dress attributed to Japanese females but the definition is simply just a 'thing to wear'.
We have also wrongly associated the word Kimono with a female dress. It is correct in Japan that the word Kimono can be used for both the male and female outfit.
With all that established now let us get back to fact no. 2.
BJJ is BRAZILIAN Jiu Jitsu.
Its Brazilian.
Nobody knows why and when they started to use the word Kimono to describe the BJJ outfit but they do in Brazil. Perhaps it was a way to pay tribute to the Japanese roots of BJJ. Nobody knows but its a fact that Brazilians call the outfit a KIMONO.
And as it is a Brazilian Martial art... and they ( Brazilians) call it a Kimono, who are we to argue.... infact doesn't that make it more correct than Gi dare I say?
Well.. thats for you to decide. :)

Our position is clear.

I train in a BJJ Kimono and it is in a Gi that I will continue to grow as a martial artist.

Keep Rocking cause you're Rolling!